5 B Corp™ companies who inspire us to be better 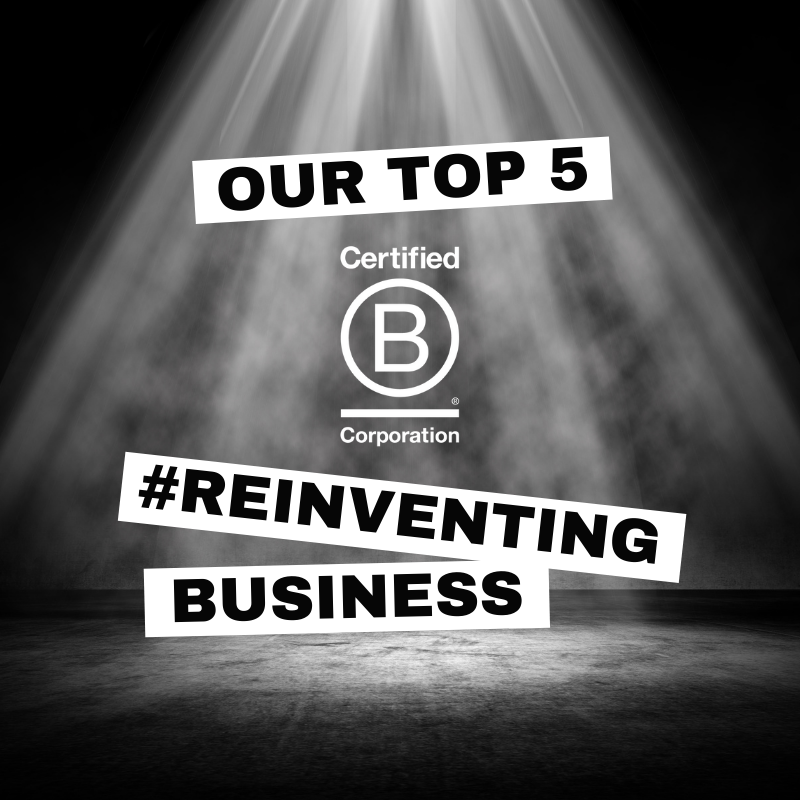 Being a part of B Corp™ means being a part of the collective of purpose-driven companies using business as a force for good. We wanted to spotlight a few of the amazing 5 B Corp™ certified companies who inspire us to be better, and who may inspire you too.

Yvon Chouinard, the founder of Patagonia, stated that they are 'trying to build a company that could last 100 years.’ Patagonia guarantee that all their products are made to last because prioritising durability results in consuming less energy, wasting less water, and creating less trash. They are combatting throwaway culture by enabling customers to have their gear fixed and to buy used gear. Buying a used garment extends its life by about two years, which cuts its combined carbon, waste, and water footprint by 73%.

Not only are they increasing the lifespan of garments already in circulation, but they are ensuring the new garments they produce are as environmentally friendly as possible. Since 1996 they have grown all their virgin cotton organically, and this season 64% of their materials were made from recycled fibres. They also pledge 1% of sales to the preservation and restoration of the natural environment, having awarded over $89 million in cash and donations to domestic and international grass roots environmental groups.

Ella’s Kitchen is another B Corporation® blazing a trail. They launched their ‘Good to Each Other’ standards for all suppliers, working with those in their supply chain to manage the higher risk ingredients, like mango, banana, and vanilla, to make sure those standards are being met. They were also awarded a Good Egg Award in 2017 and a Good Pig Award in 2018 for their commitment to Animal Welfare.

They have set out 17 Sustainable Development Goals, including Zero Hunger, which aims to end all forms of malnutrition by 2030. They have partnered with Fareshare and His Church to make sure that any surplus stock goes towards helping families and children across the UK. Responsible Consumption & Production is also on their list of goals. This focuses on being more efficient with resources, which they are doing through EllaCycle, a recycling programme that accepts any brand of baby food pouches to recycle, not just their own.

Camden Town Brewery not only produce great tasting beer, but they also have a great ethos. They ensure their employees are able to keep on learning and developing their skills by covering all employee expenses of educational materials. They also encourage the team to support local fundraising programmes and community outreach through two paid volunteering days each year. Last June their Beer Team chose to forgo their staff beer allowance to instead donate the monetary equivalent to the Stephen Lawrence Charitable Trust (Blue Print) which supports young people from disadvantaged backgrounds. They also set up The Camden Web Shop Can Swap, to raise money to help The Felix Project, a food redistribution charity.

Hello Cup have created a menstrual product with a difference. 45 billion single use period products end up in landfills and waterways around the globe each year, whereas one cup is set to last you at least five years. You can even recycle the cup when you’re finished with it. The cups are made from medical grade thermoplastic elastomer, which means they contain no BPAs, heavy metals, rubber, or latex. They have also launched their Hello Kindness programme, which supports some amazing people and organisations around the globe, including The Women’s Global Connection Africa programme and One Tree Planted, along with many more.

JoJo Maman Bébé are committed to putting people and the planet above profit. They are working on a zero to landfill plan, using fabrics from recycled plastic bottles to create children’s outerwear. In 2017 their From A Mother To Another Campaign received 65,000 pieces of clothing and 1000 pairs of shoes, potentially saving them from ending up in landfill. JoJo also work with several charities, including their house charity, the jojo. The Nema Foundation is based in rural Northern Mozambique and works to relieve child poverty via health, education, sanitation, and enterprise projects. They work with 16 communities and have so far built five schools, providing secondary scholarships and running two ambulances.